My next door neighbor’s dog was recently diagnosed with Rabies. We live in a suburban area in Johannesburg, South Africa, which is not an area where you get Rabies normally. His dog had not left the property for two years. How did it happen and should I be worried about my pets?

Rabies is a viral disease caused by the Lyssa virus that is spread by biting, and any warm blooded mammal can catch it. The rabies virus is in the saliva of the animal that bites and when that animal bites another animal, the virus gets absorbed into the nerves of the animal that is bitten. Rabies causes a “madness” in it’s final stages, which is the stage when animals bite, because they don’t know what they are doing. The dog you are referring to in your question had never had a vaccine as long as the owners had owned the dog, and was most likely bitten by a wild animal that was Rabid crossing the garden. Take your pets for annual Rabies vaccines to protect them.

The Rabies virus is an ancient virus that has caused madness for many years. Louis Pasteur, in France, was the first person to develop a vaccine against Rabies, because he grew up in an area where Rabies was common in the Wolf population and the only way to treat a bite from a Rabid wolf was to burn it out – a very painful way of treating the disease.

Most domestic animals that live in Africa, Europe, Asia and the Americas are vaccinated against Rabies, because wild animals carry Rabies. In South Africa, in Kwazulu Natal, there is also a lot of Rabies in the canine population, because most of the dogs owned by rural people are unvaccinated. The Yellow Mongoose carries Rabies in the wild animal population in Africa. In other parts of the world, raccoons, skunks, bats and foxes are known to carry Rabies.(4)  If an animal has a Rabies vaccine as a puppy, which is boostered annually in areas where Rabies is found, your animal will not get Rabies, even if he is bitten by a rabid animal.  If you live in a country which has Rabies, or if you are moving overseas to a country which has Rabies, then your animal will need proof of Rabies vaccination and possibly a blood test, and even quarantining.  Countries that are free of Rabies are usually island states, such as the United Kingdom, Australia and New Zealand.

Humans can be vaccinated against Rabies as well, and people who work with animals such as veterinarians and people who work in nature reserves and zoos, should be vaccinated regularly. In people, early-stage symptoms of rabies are generally feeling not well,  headache and fever, progressing to acute pain, violent movements, uncontrolled excitement, depression, and fear of water. This means that even if they are thirsty, people are unable to drink and will cough and splutter if water is brought near them. Finally, patients experience periods of mania and lethargy, and these lead to a coma and death from respiratory insufficiency.  Worldwide, most human rabies cases (approximately 97%) come from dog bites.(1) 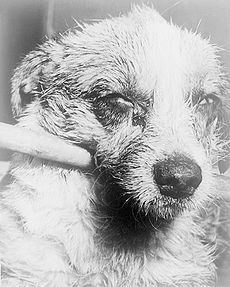 After an animal is bitten, it can take several years before clinical signs develop. It depends often on where an animal is bitten. The virus travels slowly from the area where the bite occurred, up the closest nerves, towards the brain. Once it reaches the brain it then causes inflammation of the brain or encephalitis, which causes the madness that is seen. If an animal is bitten on the face, the virus doesn’t need travel far to get to the brain, and an animal can show signs of Rabies in a short time. However if an animal is bitten on the paw of the hind leg, for example, it can take a lot longer. Three stages of rabies are seen in animals. The first stage is a one- to three-day period in which dogs show changes in behavior called the prodromal stage.  The second stage is the excitative stage, which lasts three to four days. It is this stage that is often known as furious rabies because of the tendency of the affected dog to be extremely over reactive to things  like noises, and sights and bite at anything near. The third stage is where animals become paralysed and is caused by damage to the nerves that move muscles.  Incoordination is seen owing to rear limb paralysis and drooling and difficulty swallowing is caused by paralysis of facial and throat muscles. Death is usually caused by respiratory arrest. (1)

There are two types of Rabies seen in animals: Furious Rabies, which is the very aggressive type that first comes to mind when a person thinks of Rabies and the second is Dumb Rabies. With dumb rabies, animals seem to be in a stupor. They behave differently, for example, a wild animal will wander into a person’s house, which would never normally happen.

Treatment of people if they are bitten

People are often more inclined to trust an animal that seems to be ill and will avoid a furious one, which is when people can get bitten. If a person is bitten, they should immediately wash the area well with soap and water and get themselves to a hospital. A series of injections are done around the wound.  People are given Rabies Antibodies and or a Rabies vaccination after being bitten. (2) Unfortunately, a few people do not go for the treatment and will develop Rabies years later. People often say that the site of the initial bite itches, even years later.

If an animal is suspected of having Rabies, the only reliable test for Rabies, is to euthanaze the animal, remove its brain and check for traces of the virus in the brain, called Negri bodies. In South Africa, if your dog is bitten by a rabid animal, and it is fully vaccinated, it is quarantined for up to 6 months to monitor for signs of Rabies. If your animal has not been vaccinated regularly, it will unfortunately be euthanazed.  Vaccinate your dog or cat regularly!!!!! 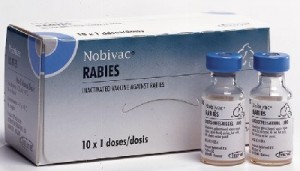 Rabid dogs will attack other dogs, animals, humans and other objects without warning. Infected dogs lose territorial instincts and wander aimlessly, fighting and biting whatever crosses their path. When a domesticated animal suddenly becomes wild and wanders around or a wild animal suddenly seems to become tame, one should suspect that animal of being infected with rabies. Paralysis sets in before death. Inquisitive children and often livestock then approach the sick looking animal, only to be bitten viciously.

Cattle become aggressive, attack people, and chase dogs and strange objects like washing. Continuous wind sucking and bellowing are often seen while the cattle also salivate and strain. They often stand around water troughs but cannot drink or swallow. It looks as though a bone is stuck in their throat. This is a very dangerous situation, because normally a farmer will try to remove the obstruction. If he has an open wound on his arm he can easily be infected with the rabies virus through the saliva. Rabid cats are very aggressive and will attack everything in their way. Horses infected with rabies will chop, bite and show abnormal aggression followed by in-coordination, weakness and death. (3)

6 Responses to "Question and Answer – Rabies – a scary issue"