I just got a new puppy and white worms with a reddish type tip are coming out of him. I’m scared he  has something serious. What must I do?

Worms can be dangerous for your pet, but in most cases, they an be treated with a simple worming tablets from your vet. Very small puppies can die from worm overload and dangerous worms like the Heartworm and Spirocerca lupi can travel inside your pet through his veins causing damage.

Signs of puppies or kittens that are riddled with intestinal worms are:

Blood or mucus in the stool

The most common worms in animals (from most dangerous to least dangerous) are:

Heartworms live in the pulmonary arteries between the heart and lungs and cause heart failure by physically blocking the flow of blood. They are carried by mosquitoes who bite your dog or cat and infect him. For more about Heartworms, please read our full article on these deadly parasites – Heartworms in Pets. They are found in the Americas and Southern Europe, but have also moved to parts of Africa such as Mozambique.

Adult Heartworms in pulmonary artery of a dog

Spirocerca lupi is a dangerous worm that can lead to cancer of the esophagus and fatal rupture of the aorta. Immature larvae live inside Dung Beetles and other small beetles, which are eaten by dogs.  Once it is digested, the larvae move out the stomach and through the liver, where they leave bleeding tracts which scar up. From the liver they move into the arteries and veins supplying the liver and migrate towards the chest till the aorta, which is the big artery in the chest that carries blood from the heart to the rest of the body. They then burrow through the wall of the aorta, which is where problems occur as sometimes this causes aneurysms (thin walled weak sacs in the side of the artery) to form, which can rupture easily, causing what appears to be a perfectly healthy dog to drop down dead. Once out the aorta they enter the esophagus (food pipe) and settle in the muscle there where they grow and mature. 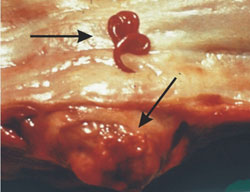 The adult worm is red. Note the large fibrous ball, or granuloma that the worm lives inside

The body lays down a lot of fibrous tissue round the worm to separate the worm from the body. The worm lives inside this ball of tissue, but there is an opening leading directly into the esophagus, and when the worm lays eggs they go down through the stomach, and out the body. A dung beetle or similar beetle will consume the feces with the eggs inside, and they will hatch inside the dung beetle until it is eaten by a dog and the cycle starts over.  The fibrous balls of tissue in the esophagus often make the dog very sick. The muscles of the esophagus lose the ability to contract and the esophagus can become dilated forming what is known as a mega esophagus. This means that food and water that is swallowed doesn’t move to the stomach, but gets trapped in the esophagus, and often run straight back out the mouth again if the esophagus gets too full. Not enough food gets to the stomach so the dog gets thinner and thinner. Water and food also run down the trachea (windpipe) into the lungs causing pneumonia which never gets better.  The fibrous balls of tissue can then also turn cancerous as the cells round the worm become so irritated that they mutate into cancer cells (Sarcomas). Worms are diagnosed on X ray of the chest and by finding the eggs in the feces.

Diagnosis is by finding worm eggs in the stool.

Signs that your dog may be infected:

Swollen glands round the face and throat,drooling, refusal to eat, and a  highly inflamed esophagus on scope

Dogs are treated with Ivermectin or Doramectin, either orally or with weekly injections to kill the worms. (All Collies should avoid Ivermectin) Disophenol is also effective. 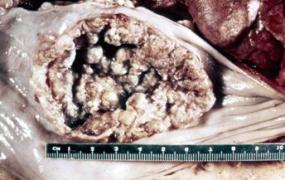 Cancer of the esophagus

If the worms have already caused cancer or mega esophagus the prognosis is poor. The cancer can be cut out followed by chemotherapy, but the esophageal damage may be too severe for normal function to resume. If there is a lot of pain and drooling, it is somewhat relieved by Phenobarbitone tablets (a common anti epileptic drug). Dogs left with a mega esophagus may always have to be fed from a height and their owners try various consistencies of food to see what they keep down the best. The pneumonia will need to be treated with antibiotics off and on.  Prevention: Monthly administration of Moxidectin (Milbemex) may help to prevent the worms from maturing.

This worm is more dangerous for humans than dogs and humans are regarded as an accidental host, which means the worm lands up inside people by accident and cannot complete it’s life cycle. In people it develop inside the body into large fluid filled sacs, called hydatid cysts, which usually have to be surgically removed. If they burst inside a person’s body they can cause anaphylactic shock. 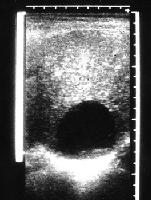 Ultrasound scan of a Hydatid cyst in a person

In dogs, they function as a simple intestinal tapeworm, and their eggs look very similar to other tapeworms that infect the dog microscopically.  The normal life cycle involves the eggs being swallowed by an animal such as a sheep, goat, rodent or cow.  Humans become infected when they swallow eggs in contaminated food.  By keeping dogs wormed, not allowing them to eat offal, and their feces disposed of regularly, you can reduce the chance of human infections.  Infections are more common in rural areas where dogs and sheep associate in:

Drugs such as Praziquantel dosed regularly to your dog will kill any tapeworms and keep your family safe.

Hookworms are dangerous for young puppies because they suck the blood. A heavy infection can literally kill a puppy. They live in the intestine and attach to the walls of the intestine and suck blood from there. They lay eggs which are oval in shape, which pass out in the feces. They hatch in the environment and the immature worms burrow through the skin of animals and make their way to the lungs from there. The larvae then crawl through the lungs to the trachea (windpipe) and up the trachea to the throat where they are swallowed. Pups can show coughing as the worms move up their windpipes. They then reach the intestine where they attach and start sucking blood again. Pups can get hookworms from their mother in the milk.

The Hookworm, invisible to the naked eye

Hookworms in adult dogs can lead to chronic diarrhea and weight loss.   They are also quite resistant to various worming drugs and resistant to dying in the environment especially moist environments. Animals often get re infected and owners that have dogs with hookworms need to worm all their dogs monthly for at least four consecutive months and thereafter every 6 months in order to get rid of the infection, and keep strict fecal hygiene as well. Praziquantel as well as a course of Fenbendazole are both effective. Hookworms are very small and not visible to the naked eye, so owners will not see the worms in the feces if they check them. Eggs are easily picked up using a fecal flotation. 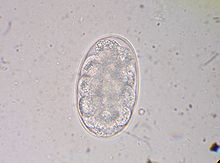 Children that play in contaminated areas can get larval worms under their skin, which are harmless, but cause a red itchy rash.

Roundworms really only cause illness in young puppies and kittens. They get the worms from the mother through the placenta and the milk, so if  a bitch or queen is pregnant, she should be wormed during the pregnancy to prevent this. Roundworms are big worms, they are usually the worms that the owners see if the stool. If a puppy has a heavy infestation, he/she will also vomit worms up. They look like spaghetti that tapers off at both ends.

They can be treated with quite a few worming compounds, and are killed by Ivermectin, Doramectin, Moxidectin, Fenbendazole, Pyrantel and Selamectin. The worms lay eggs, which pass out with the feces and the eggs stay alive in the environment for a long time. They are then eaten, hatch in the intestine, migrate through the liver then the lungs, maturing along the way, and crawl up the windpipe where they are swallowed and big enough to attach to the wall of the intestine where they feed. Diagnosis is either by physically finding these worms in the stool or by fecal flotation under a microscope.

Roundworm eggs under a microscope

If people accidentally eat the eggs, a rare condition where the larvae migrate into the human eye can occur, called ocular larval migrans, and this can lead to blindness. This form occurs most often in children who eat soil and other things out of the garden. A more common condition where people eat the eggs is called visceral larvae migrans where the migrating larvae irritates the lungs, nervous system and internal organs as it migrates until it dies.Patients can present with pallor, fatigue, weight loss, anorexia, fever, headache, rash, cough, asthma, chest tightness, increased irritability, abdominal pain, nausea, and vomiting. Sometimes the subcutaneous migration tracks of the larvae can be seen. (6)

Tapeworms will not usually kill your dog or cat.  What tapeworms do is they sit inside the intestine and eat the food that is fed to your pet.  In cats that hunt and catch a lot of rats and mice or in animals that have had a heavy flea infestation, tapeworms can cause weight loss and generally poor condition and a dull coat.  Tapeworms have more than one host, which means that another animal has to be eaten in order for your dog or cat to get a tapeworm. Humans have to eat pork to get tapeworms. Rats, mice and fleas all carry immature tapeworms and once your pet eats them, the tapeworm emerges and lives in the intestine.

An adult tapeworm with segments below

Animals generally swallow biting fleas during grooming. Tapeworm infections look like small, mobile grains of rice, that come out of the anus on their own. These grains of rice are the segments of the tapeworm that are mature and break off the end of the worm. (Taenia sp.) Because they are part of the worm’s body that break off , they have muscle, which is why they move around.

One of these segments contains many eggs. Tapeworms are easily killed by Praziquantel, either in tablet form or on the back of the neck, and animals that hunt frequently should be wormed at least every three months.

Whipworms live in the large intestine and can sometimes lead to a little blood and mucous in the stool. Whipworms can sometimes raise the potassium in the bloodstream which can interfere with the diagnosis of Addion’s disease. They can be treated with fenbendazole, milbemycin or pyrantel. Dogs get the worm eggs through contaminted soil, and ingest them.

18 Responses to "Worms in dogs and cats"