I have a question about cancer in pets. My dog, Elsa has cancer in her spleen. The vet has said that to give her a chance of survival, he would have to do an operation to remove her spleen and also have a look to see if it has spread inside as well. I want to know if I give him the go ahead for the surgery that I am doing the right thing and not just subjecting her to more pain and suffering?

The first thing you should know about cancer in a dog’s spleen is that it is unfortunately usually serious, and in most cases, even if the spleen is removed, dogs don’t usually live more than a year.  The most common cancer that is found on the spleen is called Haemangiosarcoma. It is a cancer that forms from the tissue that normally would help to form veins and arteries.  The dogs that usually get these cancers are German Shepherd dogs, usually about ten years of age and often are female.

German Shepherds are prone to cancer in the spleen.

It is called “the silent killer” because 9 times out of 10, the tumor bursts inside the dog’s body and an apparently perfectly healthy dog collapses with an abdomen full of blood. Once the cancer has burst, there is a good chance that it has “seeded” – in other words, that little cancer cells have spread themselves everywhere inside the abdomen of the dog. If the spleen is removed at this point, it will save the dog’s life temporarily (for about three months) until the new tumors have again grown to a size where they will burst and bleed out inside the dog. If chemotherapy is used, it can delay the regrowth of these tumors a little, but they usually grow back.  If the cancer on your dog’s spleen was picked up before it burst and bled out, then your dog has a  much better chance of survival than she would have had after it seeded.

Hemangiosarcomas growing in the spleen

Growths or cancers can be picked up if a dog goes in for an ultrasound exam and sometimes by feeling your dog’s abdomen during clinical examination.  Sometimes doing blood tests will also pick up if there is cancer in her body as there may be changes in the cell counts as well as elevations in some enzymes released from organs such as the liver.  If Haemangiosarcoma has been picked up before it bursts, then it is important to have an ultrasound examination of your dog’s other organs, especially her liver and heart, as the cancer can also spread to those organs prior to it bursting.  If nothing is seen on ultrasound exam, most veterinarians will give the owner the option to remove the spleen and double check the other organs at the same time.

The reason for this double checking is that tiny areas of cancer that have spread may be too small to be picked up by a scanner but can be seen by the human eye.   If nothing else is seen, your vet can safely remove her spleen and send it for biopsy to determine if a growth on the spleen is malignant(cancerous) or benign.  Your dog is able to survive without her spleen, but if you live in an area where you get ticks that carry diseases like tick bite fever (Canine Babesiosis) then without her spleen, she would be much more susceptible to this disease.  So your dog’s long term health really depends on what stage the cancer was in when it was picked up and also if the biopsy showed it to be malignant or benign. 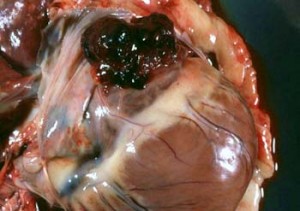 Haemangiosarcoma in the Heart of the Dog

Cancer is when cells inside the body start dividing uncontrollably. Normally your body knows that, for example in it’s liver it has “X” amount of cells.  It makes sure that it always keeps the same number of cells in the liver in order for the liver to work at it’s best. If there were too few cells there, then the liver would not do its job of removing poisons like alcohol from the body properly and the body would get ill from the build up of poisons. If there were too many cells in the liver, then the liver would grow too large for the body and the body would not be able to supply the liver with the life giving blood and oxygen it needs to survive. The body can only send a certain amount of blood through the liver with each pump of its heart. If the liver were to grow too big, parts of the liver would not get enough blood and oxygen and would start to die off.

The body controls and regulates how many cells each organ has very finely.  Quite a few checks and balances have to go wrong in order for a cell to start dividing on its own and not be picked up by the body.  This usually happens when the body is older – i.e. a senior citizen. By this age, there are quite a few “damaged” cells inside the body that the body has to keep tabs on, so the chances of one of these “damaged” cells getting out of control is far greater than when the animal is still young. Things like repeatedly getting badly burnt in the sun can damage cells in the skin, and cause them to lose their system of checks and balances, allowing skin cancer to grow.  It just takes ONE cell to escape this system and start to multiply in order for cancer to start to grow.

How does cancer kill?

Cancer takes up space inside the body and literally squashes or compresses other organs so that they no longer work well, if at all.  A dog with a squashed lung can’t breathe, and a cat with a squashed kidney cannot get rid of poisons inside it’s body effectively.  Cancers also produce chemicals that make animals feel nauseous and listless, so that they don’t eat enough to survive. These chemicals sometimes also increase an animal’s metabolism so that energy is burned up faster. This is why people and animals with cancer get so thin so quickly.

Cancer in this spleen has squashed and distored it

What is the difference between malignant and benign?

A malignant cancer is usually one which can spread by sending little seeds of itself round the body and start to grow in many different places at once. A benign mass usually stays where it is. This doesn’t mean that a benign mass won’t kill you. A large growth inside your brain will kill you just as quickly as something that spreads from elsewhere.  They both take up space and squash other organs. But usually an animal’s prognosis is far better if a benign mass is found and removed totally than if a highly malignant one is, as that one could have already seeded to anywhere else in the body. 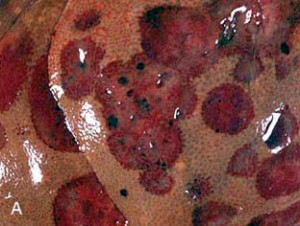 Seeds or metastases of malignant cancer in the liver

What about chemotherapy in animals?

Chemotherapy in animals is being done more and more often, as people want to give their animals the same chances that a person would have if they were being treated for cancer.  Chemotherapy works by poisoning cells in the body that multiply quickly, such as cancer cells. It also affects bone marrow cells and the cells that line the intestine as they divide as quickly as cancer cells.  This leads to side effects of diarrhea, vomiting and bone marrow suppression which allows patients on chemotherapy to pick up infections more easily.  Chemotherapy in animals is a contentious issue, as chemotherapy carries many side effects and some people feel that it would be cruel to subject an animal to them.  In my experience, the side effects seen in animals are far less than those seen in people. This is because of a number of reasons:

One – that the doses of chemotherapy used in animals are generally lower than those used in people.  In people we aim to rid the body of every last cancer cell, but in animals we aim to induce a state of temporary remission, with the understanding that the cancer most likely will recur.   If the cancer disappears for a year in a 11 year old large breed dog, and he has a good quality of life until it comes back, then it is considered to be successful as one year of that dog’s life is said to be equivalent to many more years of human life.

Two – animals don’t lose their hair. I know it sounds vain, but it is one of the undignified cosmetic side effects that scares people about chemotherapy. People don’t wish for the indignity of having a bald animal either. Luckily for animals, their hair works in a totally different way from human hair and they don’t lose it.

Chemotherapy can be given via a drip or in tablet form

Three – most people are far happier to administer chemotherapy pills at home than to bring their animal to the vet and put him on a drip for the day. Although the pills on their own are sometimes not nearly as powerful as intravenous drips, the stress on the animal and thus the owner is far less and makes for a happier client all round.

The most common side effects seen by myself are those seen with using chemotherapy (Vincristine, Vinblastine and Cyclophosphamide) to treat Lymphoma cancer and Mastocytomas in dogs and cats (two of the more common and more readily responsive to chemotherapy cancers that we encounter), and include diarrhea, some nausea and secondary infections such as chest and bladder infections that animals pick up because their immune systems are suppressed by the chemotherapy.

Prevention is better than cure

Always have every little lump checked by your vet before its gets too big and too late.  Most lumps can be checked in the vets rooms with a needle aspirate and if your vet is concerned removed, or the aspirate sent to the lab for analysis.  Routine chest x rays and scans are done in older people all the time, and if your pocket allows, there is no reason why you shouldn’t request an annual scan for your pet as well!

24 Responses to "Question and Answer – Cancer in pets"