Organophosphate and Carbamate poisoning of pets is common throughout the world. Deliberate poisoning of pets with these deadly compounds is more common in third world countries, where thieves poison pets with these illegal poisons in order to silence them before breaking into a house a few days later. In first world countries, where, these highly toxic poisons are better regulated, accidental poisoning of pets is more common, as access to the undiluted poison itself is very limited, but the poison is used as an ingredient in household pest sprays, in some tick and flea collars and tick and flea shampoos, and commercially in the agricultural industry.

HOW THESE POISONS WORK

These poisons have two actions, known as the Nictonic effect and the Muscarinic effect. The Nicotinic effect causes muscle spasms, and can paralyze pets after poisoning.  The Muscarinic effect is far more deadly: It affects the internal organs – causing vomiting, diarrhoea, slows the heart down, and fills the chest up with fluid and eventually leads to death.

These poisons work by binding to the receptors on nerve endings and blocking them. This stops the nerves from working properly, animals collapse, vomit, have diarrhoea, struggle to walk and breathe, their hearts slow down so they can’t support life and then they die. These are terrible poisons and if you have them in your home, I would keep them locked up away from small children and pets.

These are much more commonly seen in dogs as cats may not show the classic symptoms, only depression or sudden death. 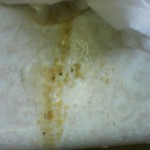 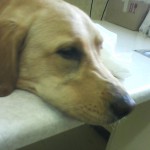 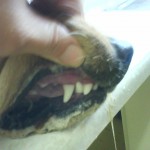 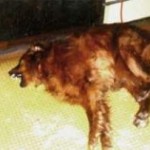 A dog having a seizure or fit

Sudden death – depends on how much poison was taken in, but dogs can die within half an hour.

RARE SIDE EFFECTS OF POISONING THAT I HAVE SEEN

Temporary paralysis usually for 3-4 days but up to two weeks. These animals may need tube feeding as well as physiotherapy three to four times daily on an exercise ball to regain muscles strength.

Twisted gut from the spasms in the intestine from the poisoning

Intravenous fluids (a drip) to support the heart and circulation 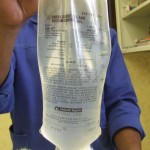 Atropine slowly intravenously and under the skin to effect and repeated whenever symptoms recur. 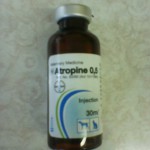 Atropine is the antidote for poisoning

Dogs that are not badly poisoned should be out of hospital the next day but dogs that have taken a lot of poison in may need to stay a few days.

If your vet has access to Pralidoxime or 2 PAM, these may be useful in cases of long term or chronic Organophosphate toxicity.

Definitive diagnostic tests measure levels of an enzyme called Cholinesterase in the blood, either in red blood cells or serum. This enzyme is affected by the poison.  It depends on your country and laboratory how long this test will take, but in some countries it takes up to two weeks, so most veterinarians will treat on the symptoms presented as waiting for the test to come back means your pet may die in the interim.

Blood can be tested for enzyme levels indicating Organophosphate poisoning

If your pet has unfortunately passed away, your laboratory can test for levels of  Organophosphate or Carbamate in the Stomach contents. Often though, these poisons may not be easily picked up, especially if the post mortem is not done quickly as the poison tends to dissipate but most pathologists can look at the general condition of the body and give a probable cause of death.

WHAT ELSE YOU SHOULD KNOW

Organophosphate poisons bind irreversibly to the nerve endings and sometimes a chronic form of this poisoning can be seen. Carbamate poisons are completely reversible with atropine. Chronic Organophosphate poisoning is usually seen with repeated exposure to the poison over time often with garden insecticides than the pet can easily gain access to and absorb through the skin, inhale or pick up by chewing on plants that have been sprayed. These pets can show weakness or paralysis of the extremities, persisting for weeks or years. Sometimes after an animal has taken in a big dose of poison, another syndrome of respiratory paralysis and weakness of the muscles can also be seen.

DOES MY PESTICIDE CONTAIN ORGANOPHOSPHATES OR CARBMATES?

Have a look at the ingredients. if the long names contain the letters CARB or FOS, THION or PHOS, the odds are that it does. Another common name is Diazinon. Not all of these poisons follow these basic rules, so be sure to ask your veterinarian or poison center if you’re concerned.