My dog often gets into fights with my other dog. How do I treat the wounds before I get him to a vet? And how do I know which wounds are serious enough to warrant treating them as an emergency?

Skin wounds are tricky! What looks like  large dangerous gash on a dog’s leg may be a very simple, clean wound that can easily be dressed and taken to the vet in the morning, and a small puncture on a dog’s body may in fact, perforate his chest cavity and be life threatening.  This Q + A will hopefully give you a better idea of how to deal with wounds.

Rule number one: Is it bleeding a lot?

Wounds anywhere on the body that leave a pool of blood under an animal are an emergency. If your dog or cat seems to be losing a lot of blood, apply pressure on the wound directly. If the wound is on a leg then you can apply a bandage to the leg to stop the bleeding. Place a clean pad of gauze or wet cotton wool directly over the wound then bandage the leg with crepe bandage over the pad and above it. Warning: if you make the dressing very tight, do not leave it in place for a few hours – it may cut off the circulation and cause gangrene. If a wound is bleeding enough that you have to put a tight bandage on, then it is bad enough to take into the vet as soon as possible.

How to apply a bandage to the lower leg

Do not use elastic bands and tourniquets on the leg unless you have been trained in first aid or told how to do by a trained veterinarian as they cut off the circulation. Wounds that have a small amount of blood oozing from them can be washed, dressed and taken to the vet in the morning. Wounds on the head, neck and body that bleed a lot –  apply pressure directly with a wet pad, as you can cut off breathing by putting a  tight bandage on them.  Basic bandage care – if the foot swells or the bandage becomes wet, either from water or from bleeding, it should be changed. Wet bandages can cause havoc with circulation underneath. Ear injuries tend to bleed a lot, even from a small nick – a pad can be placed over the ear and a loose bandage round the back of the head and neck to hold the ear flat in place with the pad on the head.  Do not make it too tight and do not cover the eyes. 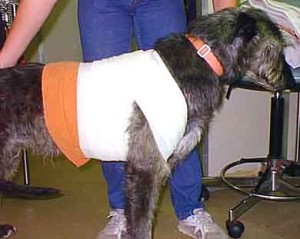 These can be an emergency and if you are in any doubt, rather take your pet in a.s.a.p. Wounds that penetrate the chest can damage the natural vacuum that exists inside the chest cavity, causing air to be sucked inside the chest and the dog suffocates slowly as air presses on the lungs  and stops them expanding.

You may feel a sensation like bubbles of air under the skin if there is air leaking either in or out of the chest.

You may see bubbling of blood and air out of a puncture hole.

Your dog may show difficulty breathing i.e he won’t lie down and stands or sits with his neck held out straight and his legs away from his chest and he may heave to breathe.

Wounds in the neck especially underneath can damage the arteries and veins as well as the airways. If the airways are damaged then air can leak out of the airways under the skin and into the muscles and the whole head can swell up like balloon.

Blue or very pale pink or white gums are never a good sign and indicate internal bleeding. An emergency!

If you feel air under the skin rather take your dog in straight away. If you think there may be  puncture into the chest, neck or abdomen, place a wet pad directly over the wound, hold it down tightly with your hand and get him to a vet. You can place a dressing round the whole chest of the dog to hold it in place but don’t make it very tight. Rather don’t bandage tightly round the neck unless he is bleeding heavily.

If you can see tendons, it’s a serious wound.

Bones, eyes, tendons and intestines:  Obviously an emergency!!! Intestines hanging out can be bandaged in place with a loose wet dressing over them and the crepe bandage round the whole of the dog’s body. If the eye has come out (they don’t fall out like in cartoons but rather hang or protrude out of the socket) apply a wet pad to the eye and get him to the vet as fast as possible so it can be replaced. Limbs that are obviously fractured and animals that are paralyzed are emergencies. If a bone is sticking through the skin then apply a pad and light bandage to prevent more dirt entering the wound.

Rule number four: With serious wounds described in rules 1-3 do not take time to clean, shave and fiddle with the wounds, rather take him to the vet immediately after basic first aid.

How to Clean and Dress Simple Wounds 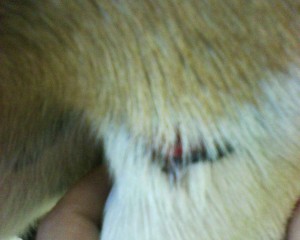 If your pet allows clip the hair shorter around the wound so it does not stick to the open part of the wound. Wounds look completely different before and after clipping the hair!  Be careful of cutting the skin, do not clip right near the skin!! Wash the wound with soap and water, you can use a disinfectant soap if you want. If the wound is small and not bleeding, you can probably leave it open till you get to a vet.  If it is large and on the leg you can apply a crepe bandage over the wound to keep it clean.  Be careful of using disinfectants in cats and snakes. Rather rinse wounds with salt water as cats and some snakes can be sensitive to phenol based disinfectants. If you have Chlorhexidine or Hibitane at home, you can use that with safety on  most domestic pets and and superficial wounds. Don’t put disinfectants down the ears,  on, or in the eyes as disinfectants may damage these sensitive organs. 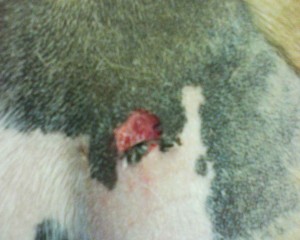 The same wound after shaving 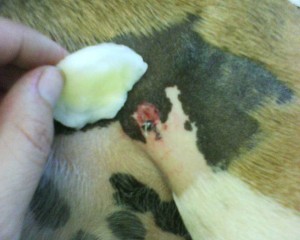 Wash the wound with soap and water

Cats that fight often get abscesses from bite wounds. There are usually about three days that pass before they get an abscess from a fight. Signs of abscesses are usually a swollen leg or upper eyelid most commonly. They also tend to get bitten at the base of the tail, and sometimes on the body, in which case you will see a limp hanging tail and/or a cat that goes mad when you touch him.  An abscess is an emergency when it affects the cat’s overall health – for example if the cat is very listless and not eating then it should be seen by a vet, but if he is eating and just holding the paw up, it can wait till the next day. Usually a swelling is seen and the skin is purplish in color. The original bite would can be hard to find and sometimes an area where the hairs are stuck together is all you’ll see. If the abscess has already burst, the cat usually feels a lot better and you may see a hole that he licks a lot in the skin. Holes from burst abscesses can be anything from 2mm to 3 cm wide depending on the severity of skin damage from the infection. Whole pieces of skin sometimes die and fall out. Your vet will usually lance and flush the abscess and usually will leave it open to allow drainage for a few days after cleaning. The holes will heal on their own.

10 Responses to "First Aid for Pets"