I have a 8 month old mastiff/lab mix called Floyd. Lately he has been sniffing my other dog’s urine and has been having these weird facial seizures which also cause him to drool. What is the cause of these seizures and what can I do to stop them from happening?

The fits looks like my dog is chewing gum, but his teeth also chatter and he drools while its happening. I feel so bad and never know what to do. He is up to date on all of his shots, but I think he got the first puppy ones when he was about 6 or 7 months old cause I was at school with him. When I bought him they gave him a Univac 7 shot that I was told would prevent Distemper.

Also, my other dog Bandit just started having these seizures. Could it be contagious? He’s never had them until I brought Floyd home. Bandit’s seizures look like Floyd’s, but his body also quivers. Floyd’s been having these seizures daily, and sometimes on more than once. I wouldn’t say they have gotten worse, but they kept getting longer for a while until it stayed around the same length of time. Bandit’s only had it happen 3 or 4 times a month.

Facial seizures or “chewing gum” fits look like a big muscle pulsing in the face on and off, often above the eye by the temple, and it can be on both sides. Some dogs can drool and have teeth chattering as well. “Chewing gum fits” are most commonly caused by the Distemper virus, but can also be a form of localized epilepsy, or meningitis as well as muscle diseases. If it is distemper it is unlikely that he will ever stop doing that as it is from permanent nerve damage. Sometimes the symptoms get worse though.

WHAT ARE THE SYMPTOMS OF DISTEMPER?

HOW DO I PREVENT DISTEMPER?

Distemper is a virus (Morbillivirus) that is related to human measles.  It infects dogs and their relatives as well as some other species, such as ferrets. Cats cannot get canine Distemper and what the public knows as Feline Distemper is an unrelated virus, which is more like Parvo virus than Canine Distemper. Distemper affects more than one place in the body at the same time. It affects the immune system, and suppresses the body’s ability to fight off infections which often leads to the respiratory system getting affected – dogs can develop pneumonia as well as constant pussy discharge from their noses and eyes. Dogs also get diarrhea in the early stages of Distemper, as it affects the gut with immunosuppression. Dogs can get a conjunctivitis (the membranes of the eyes are infected) causing pus to accumulate in the corners of the eyes. Finally, it hits the nerves and the brain, stripping the protective myelin sheath off the outside of the nerves and attacks the white matter in the brain, leading to twitching and spasms, which can progress to full blown seizures and death. 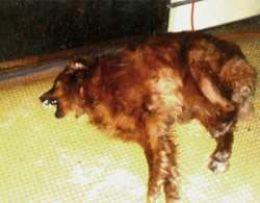 Distemper can cause seizures or fits before death

There is usually 1-2 weeks from time of exposure to development of initial clinical signs (incubation period), but it can be as long a 4-5 weeks or even more. Occasionally neurological signs develop months after exposure in dogs that never showed initial signs of infection.  The fever spikes 3-6 days post-infection, obvious clinical signs are seen between 1-4 weeks after infection (longer incubation more common),  and nervous signs signs may appear up to 3 months later with or without preceding signs. (2) Dogs shed the virus for 5-7 weeks in the urine and feces.  (3)  Distemper is transmitted in any bodily fluids, such as urine, saliva and nasal discharge. Distemper is found all over the world, but is more prevalent in third world countries,  or where people don’t vaccinate their dogs strictly.

WHAT ARE THE SYMPTOMS OF DISTEMPER?

I have listed these in the order they usually appear as the illness progresses, but each dog is different. Some dogs show most of the signs and some dogs only one or two. It depends on the dog’s immune system at the time – for example if they have had some vaccines, or if they received some protection from their mother through the milk, they are more immune and fewer signs would be seen than a dog that had never been exposed to Distemper before and had no protection from it’s parent. (Maternal antibodies to disease only last for the first few weeks of a pup’s life and then wear off, which is why puppies are vaccinated three to four times between 6 and 16 weeks of age)

An unexplained high fever can be caused by Distemper

Distemper can cause a bloody diarrhea and vomiting 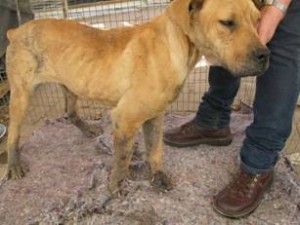 Distemper is tough to diagnose. You have to test at the correct stage of infection to pick up up the virus.  The following tests exist:

Blood tests check the serum for antibodies against Distemper

Dry eye and Conjunctivitis can be seen with Distemper Virus Infections

Treatment for Distemper is supportive. Antibiotics are given to treat the diarrhea, pneumonia and conjunctivitis. 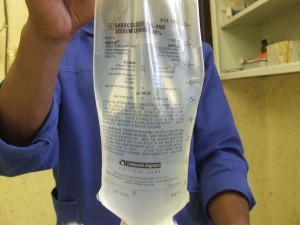 Anti emetic drugs such as Metaclopramide will help to control vomiting. Multivitamins, especially those with high levels of vitamin B in them are an aid to the immune system, stimulate appetite, as well as helping the brain recover from the infection.  If dogs are very ill, they can be given intravenous fluids and possibly also tube fed or fed orally. If one of your dogs is diagnosed with Distemper, vaccinate all your other dogs at least twice, one month apart.

HOW DO I PREVENT DISTEMPER? 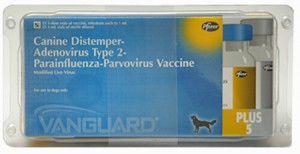 Vaccinate your dog!!  Puppy vaccinations should start at 6-7 weeks old, and then be repeated 2-3 times every 3-4 weeks after that to prevent Distemper. One vaccine won’t prevent it entirely!!  Your dog should also be vaccinated at least every 2-3 years to keep his immunity against Distemper strong. Distemper doesn’t last for more than a few weeks in the environment and will be killed by most disinfectants with quaternary ammonium compounds in them.  If your pet recovers from Distemper, he will continue to shed the virus for up to three months but usually for 5-7 weeks.  If you want to get another dog, you should wait for the 3 months plus another month for all the Distemper to die in the environment as well as disinfecting all hard surfaces such as tiles and concrete runs and courtyards and the kennels and bedding.

6 Responses to "Distemper in Dogs"