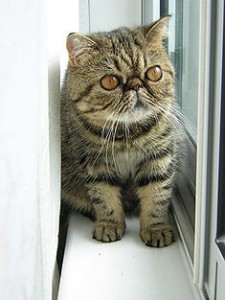 The Exotic Shorthair was developed to be a short haired version of the Persian, with the flat face of the Persian but a short plush teddy-bear look.(1)(3) They are very  responsive to humans and human emotions, and inherited their personality and gentle ways from their Persian ancestry. (3) With today’s busy lifestyles cats have become more popular. Persians are a very popular indoor cat, but require daily grooming to maintain their beautiful coat, so busy people who like Persians but don’t have time for daily grooming, can choose the Exotic. Their coat requires much less combing and won’t mat or tangle. Thus their name – “Lazy Man’s Persian.” (4)(5)

In the late 1950’s, Persians were used secretly by some American Shorthair (ASH) breeders  to “improve” the American Shorthair breed, to improve body type and to introduce the “silver” color of the Persian into the breed . (1)(3)(6)(7) Kittens resulting from the out-crosses were unique and had a decidedly different appearance than what they expected.  (3)  These cats did well at shows, but breeders unhappy with the changes to American Shorthairs pushed to disqualify the new cats. In 1966, Jane Martinke, a CGA judge and ASH breeder managed to get the Cat Fanciers’ Association to recognize them as a new breed, under the name Exotic Shorthair.(1) The first name suggested for them was Sterling because of its silver color. However, they settled on the on Exotic Shorthair as a name, reasoning that by the introduction of new silver color in the American Shorthair, the breeders had made the breed exotic. In 1967, the Exotic Shorthair was accepted for CFA championship and in 1993; the CFA shortened its name to Exotic.(5)

The first crosses of the Persian and the American Shorthair resulted in a heavy boned, densely furred cat. (6)  American Shorthair breeders were given a choice of registering the kittens as Americans or Exotics, but once registered as Exotics they could not return to American. (3) The Exotic now resembles the Persian except in the coat length. (2) Exotic Shorthairs are a mix of many breeds for example:  Burmese (to introduce the short coat), British Shorthairs,  American Shorthairs, Russian Blues and Persians. (3) These breeds were only used long enough to innoculate the shorthair gene into the bloodlines. Once in the bloodline, crossing back to shorthairs was unnecessary. In 1987 CFA completely banned Exotic to shorthair out-crosses, allowing Persian out-crosses only. (1)(2)(6) In 1971 the first Exotic Shorthair achieved the status of Grand Champion.  Today, the Exotic has a large following among cat fanciers. (7)

The Exotic is a medium to large cat with short, thick, strong legs.(2) The Exotic must meet Persian standards with regard to nose, eye, ear, chin, and build. An ideal Exotic should present an impression of a heavily boned, well balanced cat with a sweet expression and soft, round lines (3)An average exotic breed weighs around 6-14 pounds. They have a well-balanced body with a short, thick tail. (5) The thick, soft coat allows them to tolerate cool climates and (2) softens the lines of the cat, accentuating the roundness. (3) The coat is thick and soft like a British Shorthair. The coat can grow up to 7.5cm (3″) but should not be long enough to fall or flop. (6) 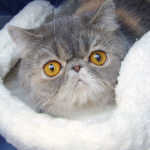 The breed comes in all 96 colors of the Persian, these include black, white, cream, blue, Himalayan and tortoiseshell with the appropriately matched eye color.(6) The eye color must conform with the coat color.(2)(3) Apart from all the Persian colors, they are also available in a rainbow of hues. (5)  The large, round eyes set wide apart in a large round head contribute to the overall look and expression.(3)  Exotics have a massive, round head with a short,  thick neck with a flat face like the Persian.

The personality of the Exotic is a combination of the placid, affectionate nature of the Persian with the playful inquisitiveness of the American Shorthair. The Exotic Cat is friendly and quite lovable. He is a quiet, affectionate cat who makes a great companion. (2) Exotics have  a sweet,  loyal, endearing nature. Their voices are seldom heard and are easy going –  not much seems to disturb them. In general, they are extremely affectionate. They quietly beg for your attention by just sitting in front of you with an irresistible look focused on your eyes. They will jump in your lap to curl up for a nap or push their wet nose right into your face. Some like to sit on your shoulder and hug you when you pet them.  An Exotic is very comfortable to have in your home. They give you privacy and do not constantly demand attention. They will, however, quietly follow you from room to room just to be nearby. They are just as playful and fun loving as other breeds. They will jump until exhausted trying to catch a toy on a stick, or they will sit and carefully study how to get the toy down from the top of the bookcase where it was placed when you stopped playing with them. 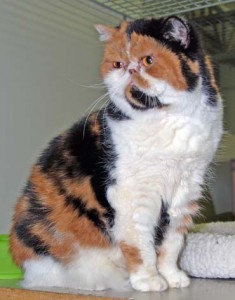 Males are more affectionate than females

Male Exotics are, in general, more affectionate than females as females can be more aloof. Exotics mature later than most other breeds, and since all pets should be neutered and spayed at an early age, problems related to spraying and other adult urges aren’t a concern. Adult Exotics enjoy simple pleasures, like watching water drip from a faucet or chasing paper balls around the house. They can fit into your household at any age. Exotics stay playful as adults and bring pleasure for many years.  (4) Exotics love to sleep and live a luxurious life style. They are called the perfect indoor cats because of their tame and docile Personality.(5) They are more athletic than the Persian and more sociable than the British Shorthair as well as being cuddly and affectionate.(6) Exotic Shorthairs are equally at home indoors or outdoors. Exotics are great companion pets for the elderly as well as being suitable for a family.(6) They tend to be generally livelier and more inquisitive than Persians, (3) although as the Exotic’s line of Persian ancestors is becoming longer and longer, their temperament is becoming more Persian like.

While their shorter hair is less obvious than a Persian’s coat, they do shed heavily leading up to summer. (6)  Gentle brushing with some extra attention given during shedding time so as to avoid hairballs will maintain his coat. (2) In extremely hot climates, some owners do have their cats shaved, although these animals would not be able to be shown.

Pricing on Exotics usually depends on type, applicable markings and bloodlines distinguished by Grand Champion,  National or Regional winning parentage or of Distinguished Merit parentage. Usually breeders make kittens available between twelve and sixteen weeks of age. After twelve weeks, kittens have had their basic inoculations and developed the physical and social stability needed for a new environment. Keeping such a rare treasure indoors, neutering or spaying and providing acceptable surfaces (e.g. scratching posts) for the natural behavior of scratching are essential elements for maintaining a healthy, long and joyful life. (4) Exotic Shorthairs make good mothers and do not have many problems kittening. Litters usually consist of four to five kittens. About 50% of the litter are Exotics, the other 50% have longhair. Kittens sell for about $250 plus depending on the quality of the animal.(6)

If the cats are kept indoors they need a fresh supply of water and some grass grown in a pot on which they can chew.(6) 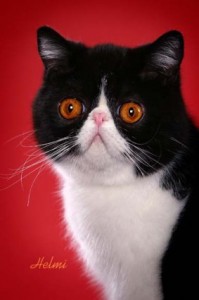 Because of the regular use of Persians as out-crosses, some Exotics may carry a copy of the recessive longhair gene. When two such cats mate, there is a one in four chance of each offspring being longhaired. Ironically, longhaired Exotics are not considered Persians by CFA, although The International Cat Association accepts them as Persians. Other associations register them as a separate Exotic Longhair breed. (1)

The Exotic Shorthair is similar to the Persian in many ways, including temperament and conformation, with the exception of the short dense coat. It has even inherited many of the Persian’s health problems.(1)

They live between 12 and 14 years.  (6) The squashed face of the exotic Shorthair cat can lead to some eye problems. Blocked tear ducts and discharge from the eyes is common so keep the eyes clean with a tissue or wet washer. The face can develop a wet eczema from constant tearing if it isn’t cleaned regularly. Exotic Shorthairs have an average lifespan of 12 to 14 years.(6)

Exotic shorthairs can be prone to respiratory issues. The flat nose can sometimes be bred in such a way that the nostrils are too small to allow enough air in when breathing and these cats wheeze a lot and if under stress, especially in hot climates can go blue (cyanotic). It is important to get your vet to check your cat’s airways as there is an operation to correct this problem.

Avoid getting an Exotic with Feline Herpes virus!

It is important also to get a kitten that is free of feline Herpes virus. Because feline Herpes affects the airways, many kittens infected before the first vaccine tend to become chronic carriers of Herpes and sneeze all the time, often with mucky discharge that has to be cleaned from their noses. Unfortunately, kittens from catteries where they are intensively bred and housed often come with Herpes. If the kitten has had a “cold” but is better now, beware of feline Herpes!! Once infected, they never get rid of it!! Many cats with feline Herpes end up at eye specialists because of ulcers on the eyes that won’t heal and have to have lysine supplements and eyedrops to control the infections all their life.  The kitten vaccines protect them from Herpes, but only if they come into contact with it for the first time at least 2 weeks AFTER the first vaccination.

10 Responses to "Breed of the Month – The Exotic"