Originating during the late nineteenth century, Border Collies were developed along the Scottish-English and Welsh- English borders. The Border Collie is descended from droving and gathering breeds. Sheep herding “collie” type dogs, have been tending herds since the Romans landed in Britain. Today breeders try to balance inherited working traits to produce the best dog for their purposes, factoring in climate, terrain and livestock type.

Border Collies are medium-sized athletic dogs with a wide breed variety. Colors include black & white (most common) , red & white, tri-color and black & gray. Black tricolor, red and white, and red tricolour also occur, with blue, lilac, red merle, blue merle, brindle and “Australian red”/gold less frequently. They may also have single-color coats. There are two double coated coat varieties: rough or smooth. The outer coat is either wavy or straight and coarse. The under coat is dense, short, and soft. Rough coated collies have medium length fur and develop thick undercoats which must be combed out in summer. The long tail sometimes raises but never curls over the back.

They have a wide head with a tapered muzzle, with ears varying from fully erect to fully dropped. They have large haunches, and oval hypnotic eyes with an intense stare. Eye colours vary from deep brown to amber or blue with occasionally one eye of each color, usually in merles. They are light on their feet and have a flowing movement. 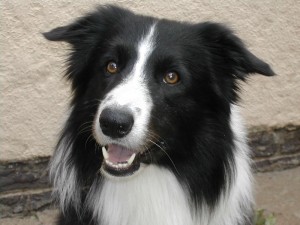 Those dogs bred for the conformation ring must have a “keen and intelligent” expression, and dark brown eyes are preferred. Males stand between 48cm to 56 cm at the withers and females between 46 to 53 cm.

Border Collies are highly intelligent and active dogs with a great willingness to learn. Regular doses of positive reinforcement will help them thrive. A firm (but friendly) owner who can keep up with obedience lessons and training is necessary, with early socialization and obedience being recommended. You should be able to spend some time each day working your dog. In show-ring sports such as agility, they excel. They tend to focus on motion and try to stop moving objects (including people and animals) by getting in front of them. They may also tend to herd animals and small children and need space to run and explore. Border collies like to work and need a job. However, a job to a border collie isn’t necessarily working live stock. An basic activity such as Frisbee, chasing and retrieving a ball to the more advanced herding, agility or obedience training all qualify as jobs. As long as the Border collie is in the herding/working position, (Crouched down, tail tucked between legs, eyes firmly fixed on the matter in hand), it considers it work. 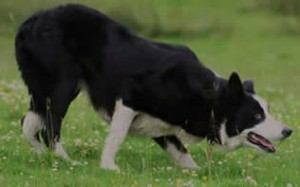 They are good watchdogs, affectionate to their family and friends, but suspicious of strangers. They tireless workers and perfectionists, meaning that they will do everything they can to make it right after they have done wrong. The Border Collie is extremely sensitive and thrives on human interaction, desiring to participate in every phase of human activity. However, they do take time, patience, and dog-handling skills to develop into either a working dog or a fine companion dog. Border Collies do best in a home with older considerate children. They typically get along with dogs they have been raised with but should not be in a home with cats or other small household pets. They do not do well if left alone for extended periods of time and will suffer separation anxiety or become destructive.

They become very bored with inactivity, but won’t usually exercise on their own, requiring humans to exercise them. An unstimulated Border Collie may become compulsively riveted on things with moving parts, things like analog clocks or dripping taps. They may become neurotic and over-possessive to their owner or toys. Tendencies, such as constant pacing, digging and even throwing itself against a wall may be seen. They may become escape artists, chasing cars, children, bicycles, or livestock, with their herding drive. Out of frustration, Border Collies may even nip running children. Inappropriate herding should be stopped immediately by saying no and meaning it.

If you’re just looking for a nice family pet, a Border Collie might not be the ideal choice. They are not recommended for apartment or city dwelling. They do best on a working farm or in a rural secluded setting where they are able to romp, run, and roam freely and safely.

On average, Border Collies reach 12 years but can live up to 15 years.

Hip Dysplasia (HD), genetic eye diseases such as Collie Eye Anomaly (CEA) as well as epilepsy are the more common breed related diseases. Elbow dysplasia (OCD), deafness, and hypothyroidism may also occur. Dogs homozygous for the merle gene are likely to have eye and/or hearing problems.

CEA is a congenital, inherited eye disease involving the retina, choroid, and sclera. In Border Collies, it is generally a mild disease and rarely significantly impairs vision. There is now a DNA test available for CEA and, through its use, breeders can ensure that they will not produce affected pups. It is recommended that breeding stock be checked prior to being bred.

Hips should be examined by Xray for HD and the X rays evaluated by a reputable veterinarian and graded. Insist on seeing the certificates of the parents. Dogs do not have to be obviously lame to have this condition and pass it on to their offspring.

Neuronal Ceroid Lipofuschinosis (NCL) is a rare, serious disease limited to show Border Collies. It causes severe neurological impairment and early death; afflicted dogs rarely survive beyond two years of age. There is no treatment or cure, but a DNA test is now available to detect carriers as well as affected dogs.

Trapped neutrophil syndrome (TNS) is an inherited immunodeficiency disease which results in mature white blood cells being unable to move out the bone marrow into the blood stream. Affected pups usually die from infection. There is no cure, but a DNA test is now available to detect carriers as well as affected dogs.

Osteochondritis dissecans (OCD) occasionally causes elbow and shoulder lameness, and some researchers feel there is a genetic component. 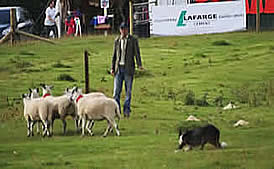 Border collies are used for livestock work, dog sports such as jumping, speed and agility, tracking dogs, and search and rescue dogs. Border Collies are also used successfully in police work, as therapy dogs and guide dogs for the blind and handicapped.

9 Responses to "Breed of the Month – The Border Collie"