We seem to have one heck of a stressed out kitty on our hands. 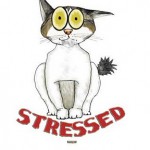 What are the common signs of stress in cats?

He was fine for the first month we got him. And then….

1. He got a bladder infection. Treated with antibiotics.
2. He started pulling fur out of his chest. Covered with a bandanna until he stopped.
3. He started pooing on the floor… and has not stopped. Tried deworming, antibiotics, tested to see if he could feel feet and tail. He’s on Buspar. 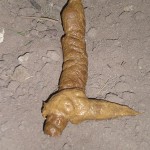 4. He started meowing when he’s alone/can’t find us, which he never did before.
5. Just brought him to the vet on Friday – another bladder infection.

He cannot go outside, we’re in an apartment. He doesn’t ever want to play, so play therapy isn’t working.
I know that he was very attached to his mother. We’re contemplating getting him a playmate.

I’m not sure if your kitten was taken from its mother too early or if it was the only kitten in the litter?
However, you should go to the vet and get something called Feliway. 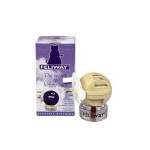 It comes in a diffuser (like those that you plug in the wall for insects) and this will give off a pheromone which calms cats and kittens. You can also get it in a spray and spray this in all strategic areas. It has been known to help.
Getting another kitten might help as then he won’t be so lonely.
Regards,

He was the only kitten in the litter that survived.  I never thought about it, but that probably has something to do with it.  He was with his mother until he went up for adoption at 7 months and I understand that he followed her everywhere.  He was also with another kitten that the mother seemed to “foster.”  They played a lot.  (Thankfully the woman that fostered him is very nice and has provided me with his background.)

We did try the Feliway and it seemed to make him nervous.  It was a weird reaction.

We will try to get him a playmate.

Try alleviate loneliness by getting your cat a friend

Thanks for writing back!