He is extremely hyperactive and is driving the other pets(dachshund,golden retriever, two cats) insane.  He is constantly running.  He pokes his nose at the cats and the other dachshund almost in a pecking manner which annoys them.  He has begun chasing his tail and biting his feet and tail.  From what I read hyperactive dogs need exercise more than most.  So he is walked at least 20 minutes each day.  He is a small dog and seems to be suffering from luxating patella….his hind leg is lifted every couple of steps especially when running.  He constantly bites, chews, nips and jumps up.  He won’t easily allow anyone to hold him or pet him.  I am contemplating taking him to the vet to see if there is anything they can do to help?

Hi Micheline,
You certainly do have a problem with your new Dachshund!  I’m not sure where you purchased the Dachshund from, but a one year old dog going to a new home will probably have “baggage” that comes with it.  Most probably this behaviour was happening in the previous home and that is why they wanted to find it a new home!
Dachshunds can be hyperactive dogs, but the behaviour of your dog is excessive.   It obviously does not respect any rank hierarchy and this is noticeable with him pecking at the other dogs.  You need to establish a hierarchy quickly – the female is always the alpha pack leader, so if you have a female she will be the highest ranked dog.  The new dog needs to learn that he is at the bottom of the pack (unless you have a very submissive male and then the new dog will be higher in rank). If you find the new dog pecking at the other dogs, bunch your finger up and peck at him. This will put him in his place with you and calm him down.
Chasing the tail and biting feet is an obsessive compulsive disorder and can only get worse.  You must make sure that you do not pay attention when he is doing this. By saying “no, stop it” you are giving the dog attention and he will continue doing it to get your attention.  When he starts doing this, use a spray water pistol, or a spray water bottle and without him seeing you, give a spritz and then look away as if nothing happened.  This will distract him from what he is doing and when this happens try to get him to do something else – like fetch a ball, or tug on a toy. 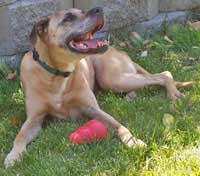 You could also get interactive toys – like a kong stuffed with food; treatballs, and chewies to keep him occupied and to leave the other dogs and cats alone.
I would advise that you do get him checked by a vet to see if he does have the luxating patella. However, many small dogs lift their one leg when running as a habit.
To stop him nipping, biting and chewing use the water pistol, or water bottle and give a direct spritz to his face. Dogs usually don’t like this and will stop.  Eventually you will just have to hold the bottle and he will stop.
Many dogs dislike being held – just like some humans, they don’t like people to invade their space!  This also could be part of the “baggage” from his old home – maybe he was hurt when being held.
Keep up with the walking – all dogs need to get out of their environment to “read the news”.
I don’t believe in drugging a dog, however, some homeopathic remedies can help.  You could give the Dachshund some Rescue remedy which can help to calm him down when he is very hyperactive. 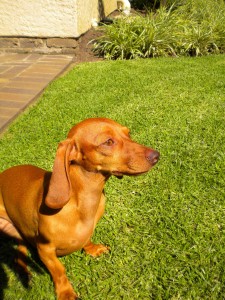