Dear Your Own Vet

Is it ‘normal’ for a female cat to spray?

It is known that male cats will spray their territory to mark it, especially when there are quite a few un-neutered males living in close proximity to each other. This sort of situation is seen in apartments (flats), or townhouses (condos)  where cats are allowed. A normal male cat in the wild will establish a fairly big roaming territory and will fight any other cat that comes into the territory.  This territory would normally encompass an area of a minimum of two thousand square meters and may even extend more than a block.   Most people that I have met own at last two cats. Put an animal in a situation that is unnatural for him, and he will become stressed and one of the ways that cats that are territorially stressed cope with this stress, is to mark their territory via urine spraying, face rubbing and releasing chemicals from their feet known as pheromones whilst scratching.

Cats spray as territorial behavior or because of stress

The same holds true for female cats and neutered male cats. These animals may not have the intense territorial and sexual urges of the Tomcat but put them in a situation where they feel stress and they will react in a similar manner. Although most domesticated cats are sterilized, areas such as Townhouses and Flats also have a lot of garbage, which tends to attract feral cats as well. Feral cats, or wild cats are a problem in every large city in the world, despite many animal society’s efforts to catch and sterilize them.  The added stress of Feral cats also can potentially increase the spraying problem.

Other things that may stress any cat into spraying include moving house, the introduction of  a new pet or family member, another cat from next door increasing it’s territory and your cat being attacked or threatened in it’s own garden.

Dealing with the problem

The main difficulty that people whose cats have been spraying for a while encounter is that the urine tends to keep attracting the cat back to the same place, and when it is cleaned, they invariably mark again. Cats are scent orientated creatures and their urine is quite strong smelling, so this is the first problem that needs to be dealt with.

Firstly: Cleaning –  Do not clean with ammonia based household cleaners. These smell similar to urine to your cat.  Use ordinary dish washing liquid or biological washing powder, as it is more likely to lift the organic molecules of urine out of fabric. If you have access to a steam cleaner that extracts dirt as it sucks, use it. Some people recommend using a black light to find all the urine that has been sprayed. (1)

Secondly: Keep the cat away from the area where it was spraying. Citronella based products smell pleasant to us but horrible to cats and can be sprayed safely with no harm to your family, in the area where your cat sprays. Remember they work best if sprayed more than twice daily. Once a week won’t work.  Aromatherapy oils that are citrus based can be burned in the area and your cat won’t like them either.

Citronella based sprays are good deterrants

Thirdly: Calm your cat. You won’t fix the behavior if you don’t address the primary problem. Take your cat to the vet and have him/her tested for  urinary tract infection. If your cat has not been sterilized yet, have it done!!! It’ll work wonders. Unsterilized cats run the risk of picking up horrible viruses through fighting such as feline AIDS and Leukaemia, so really there is no sound reason not to sterilize your cat.  If you cat is clear of an infection and has been sterilized, then the problem is likely to be behavioral. If there is anything immediately obvious such as your new dog chasing your cat, then make an area where the dog can’t go and your cat feels safe in.

DO NOT PUNISH YOUR CAT  as this will only increase the stress he/she feels. (1)

Both natural and veterinary medicines exist to help you with this problem.

Natural remedies include rescue remedy, a homeopathic drop that comes in a tablet or a liquid form. It can be give 2-3 times daily to calm your cat. Dilute the liquid form in water as it is alcohol based.

Vitamin B based calming pills can also be given twice daily to calm your cat.

Feliway® is a pheremone based product that comes in a spray and a diffuser that you plug into the wall.  It contains “happy” hormones, like the ones usually released from your cats face when it purrs and rubs against you.  Plugging it in and putting your cat in the same room for a few hours each day can really help calm your kitty! 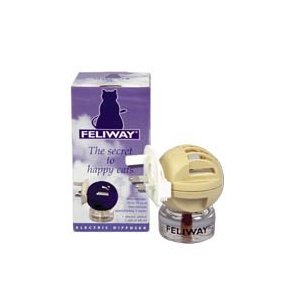 Veterinary drugs include Clomicalm (Clomipramine) which is a tricyclic anti depressant, specifically marketed for cats for urine spraying. Used daily for a few months, and then gradually reduced, it can really help reduce the feeling of stress that leads to spraying. Side effects include a general lethargy and grogginess, which necessitates reducing the dose the cat gets daily. It may also raise live enzymes in a small number of cases so is not recommended for cats with live problems. Cats on this long term should have a liver function test every three months.

Please remember that people with problem cats have to complete steps 1 , 2 and 3 in order to be successful and that the problem will take a few months to resolve. Please don’t wait until you have “had enough” and bring your cat in to be put to sleep without trying this advice first, which sadly is the case with many spraying cats.